In 2020-21, staff and volunteers from across ESA received formal acknowledgement of their contribution and service to the community through a range of honours, awards and recognition events.

In 2020-21, staff and volunteers from across ESA received formal acknowledgement of their contribution and service to the community through a range of honours, awards and recognition events. 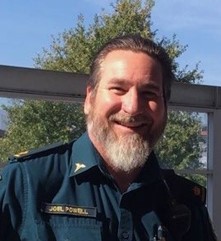 Mr Joel Powell from ACTAS was recognised with the ASM as part of the Queen’s Birthday honours 2021. Mr Powell commenced with the ACT Ambulance Services in March 2008 after initially undertaking his ambulance training with the Queensland Ambulance Service. During this time Mr Powell has shown dedication and leadership to ACTAS and his colleagues through his role as a Duty Officer, Peer Support Officer, and a training facilitator. 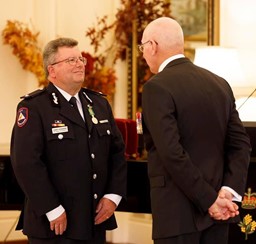 Mr Gary Hooker from the ACTRFS was recognised with the ASM as part of the Australia Day honours 2021. Mr Hooker was recognised for his role as a volunteer with the ACTRFS since 2002. He has constantly shown a willingness to assist his brigade and the community, taking on roles he could see were of benefit to the members and the service. Gary’s leadership has made him a trusted role model within the service. His leadership, commitment, and desire to improve the service has not gone unnoticed within his brigade and the ACTRFS more broadly. Mr Hooker not only has a passion for assisting the community through volunteering as a firefighter, but he also adapts his passion for photography to document the work undertaken by volunteers. Mr Hooker’s work goes above and beyond in acknowledging volunteers and creating a permanent record recognising the sacrifice of the volunteers themselves, their families, employers, and the commitment to the community. 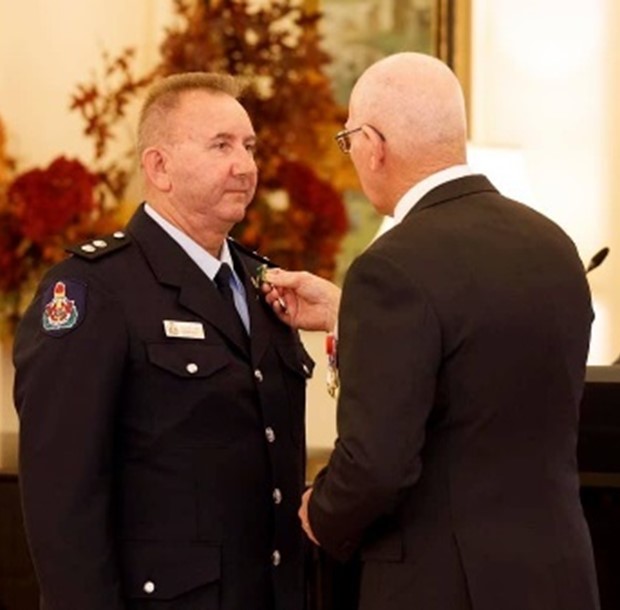 Station Officer Noel McLaren from ACTF&R was recognised with the AFSM as part of the Australia Day Honours 2021. Mr McLaren joined the then ACT Fire Brigade on 19 April 1990. He has diligently served the ACT community through his work with ACTF&R for 30 years, achieving the rank of Station Officer. He was instrumental in the development of the Firefighter and Senior Firefighter Development Programs and career pathways that led to the attainment of nationally recognised training qualifications for ACTF&R firefighters. 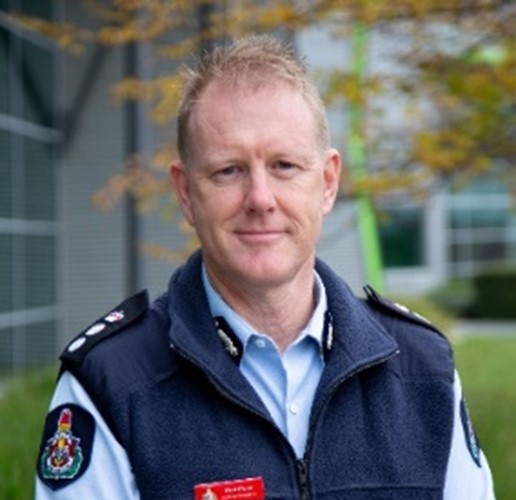 Superintendent Paul Flynn from ACTF&R was recognised with the AFSM as part of the Queen’s Birthday honours 2021. Mr Flynn commenced with the then ACT Fire Brigade on 31 October 1997 as a recruit in College 23. During Mr Flynn’s 23 years of service, he has worked across a range of operational and portfolio areas in ACTF&R and has consistently displayed diligence and dedication in the safety, education, mentoring and training of firefighters. 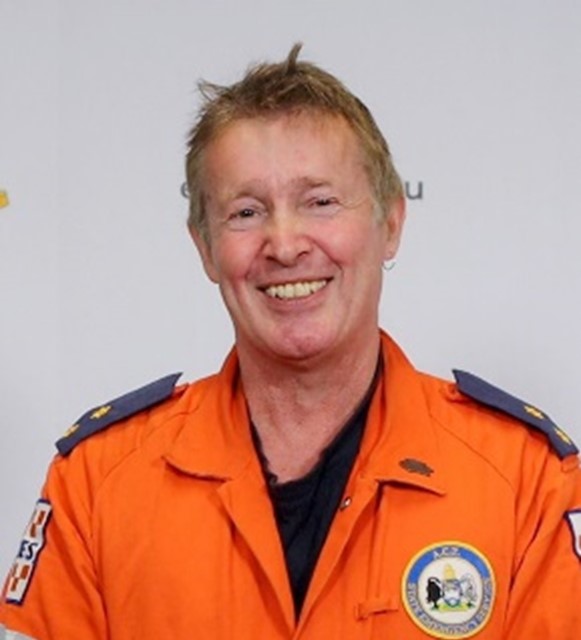 Mr James Montgomery from the ACTSES was recognised with the ESM as part of the Queen’s Birthday Honours 2021. Mr Montgomery has demonstrated an outstanding level of commitment and made an invaluable contribution to the community as an active volunteer with the ACTSES for more than 23 years. During this period of distinguished service Mr Montgomery has directly contributed to the ongoing development of the ACTSES into the highly regarded organisation it is today.

Mr David Tunbridge, ACTRFS, was awarded with a third clasp to the National Medal for an outstanding 45 years of service to the community.

Senior Firefighter David Balfour’s commitment to firefighting was honoured the awarding of the National Medal to the Balfour family. Dave Balfour was killed in the line of duty assisting the citizens of Victoria during the 2009 Black Saturday bushfires. This was the first time that the National Medal has been awarded posthumously. We thank the Balfour family for accepting this award and allowing the firefighting community to honour David’s legacy. 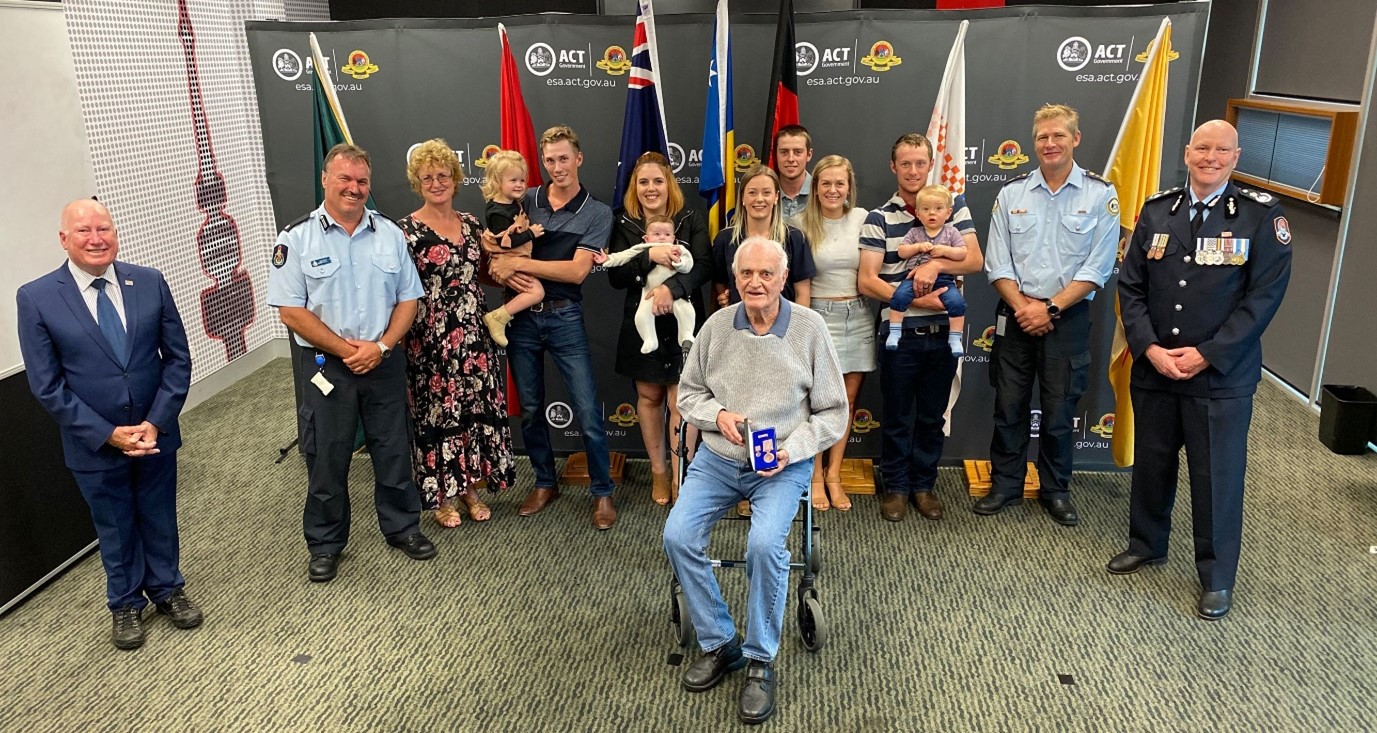 The Community Protection medal is awarded to a person who has given sustained distinguished or outstanding service to the ACT Community. Due to the onset of the COVID-19 Pandemic and the declared Public Health Emergency, the Ceremony for the 2020 Community Protection Medal was postponed from March 2020 until September 2020. At a virtual ceremony held on 04 September 2020, the following recipients from ESA were recognised with the medal.

At a ceremony held on Monday 07 June 2021 at the National Arboretum Canberra, five members from ESA and Operational Services received the 2021 Community Protection Medal. 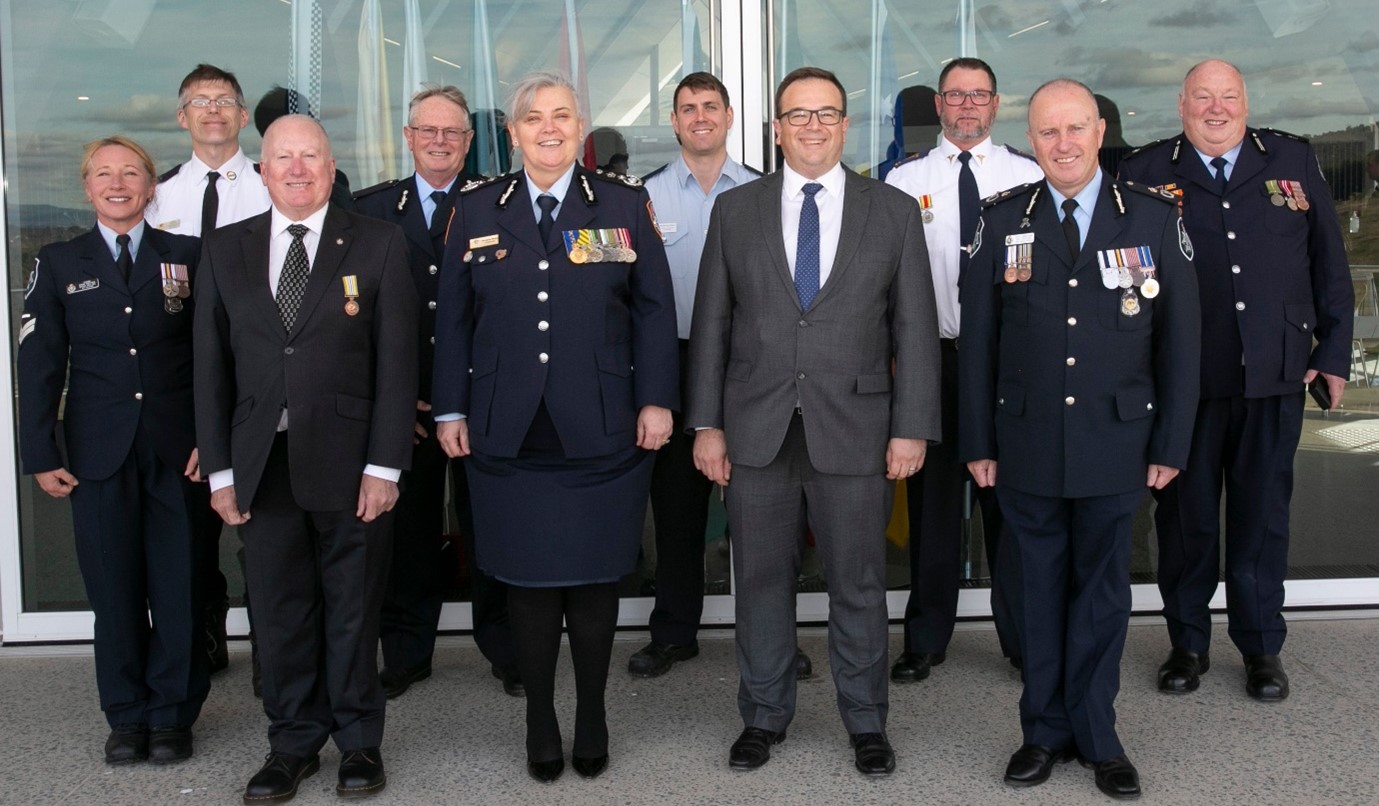 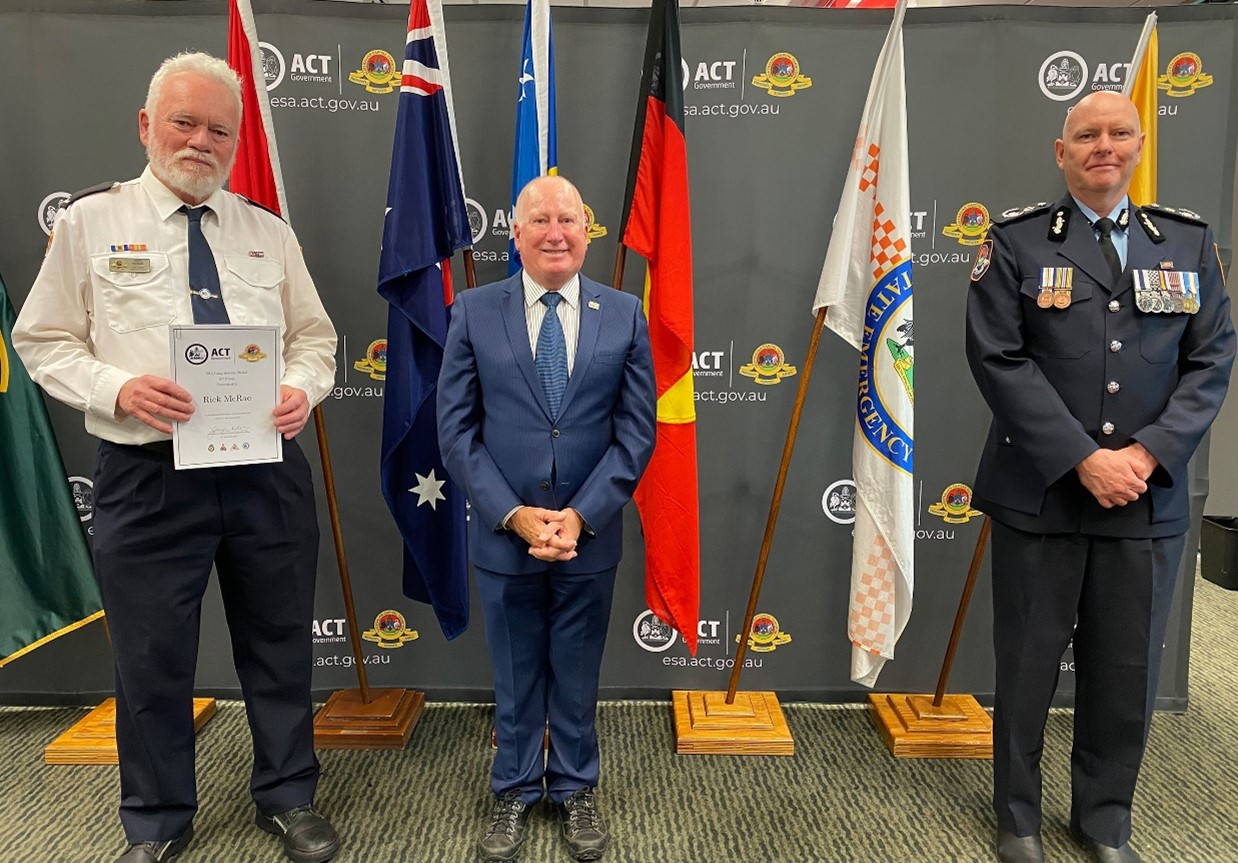 Operations Support team members Mr Rob Trevillion, Mr Paul Woods and Mr Rahimat Ali received a Chief Officer’s Commendation in recognition and appreciation of their exceptional support to the bushfire response and the COVID-19 response throughout 2020.

Senior Firefighters Mr John Whitmore and Mr Dan Orwin were recognised with a Chief Officers Commendation for their exemplary efforts to support a vulnerable member of the community whilst undertaking their duties as a Communications Centre operator.

The Chief Officer’s Commendation for diligent service was awarded to Mr David Anderson, Mr Michael Blaseotto, Mr Evaane Chadwick, Mr Sean Lang, and Mr David Pennock for their ongoing dedication and commitment to their brigade and the service.

The Chief Officer also awarded Unit Citations for Exemplary Service to all eight of the ACTRFS Brigades as well as the Nerriga Strike Team for their dedication and commitment throughout the 2019-20 bushfire season. 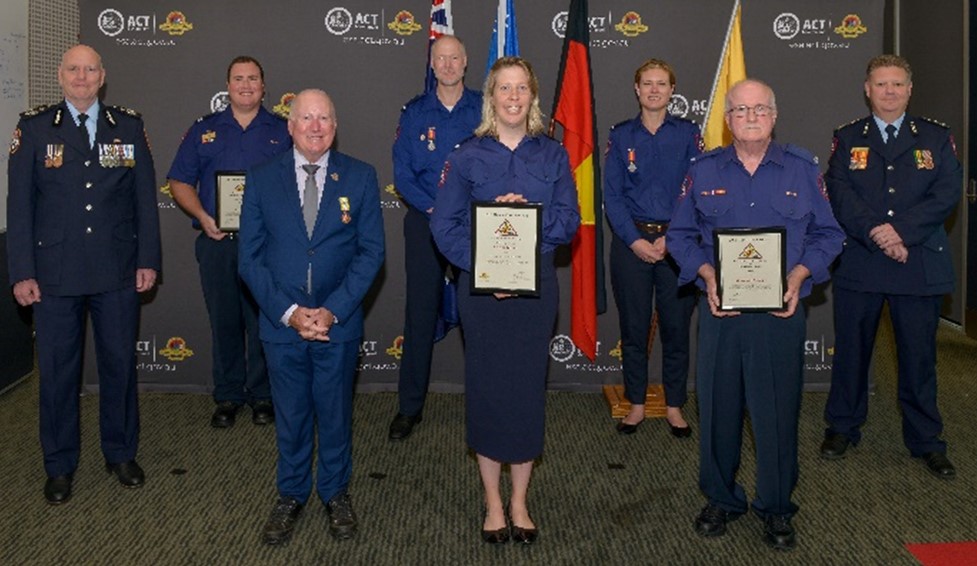 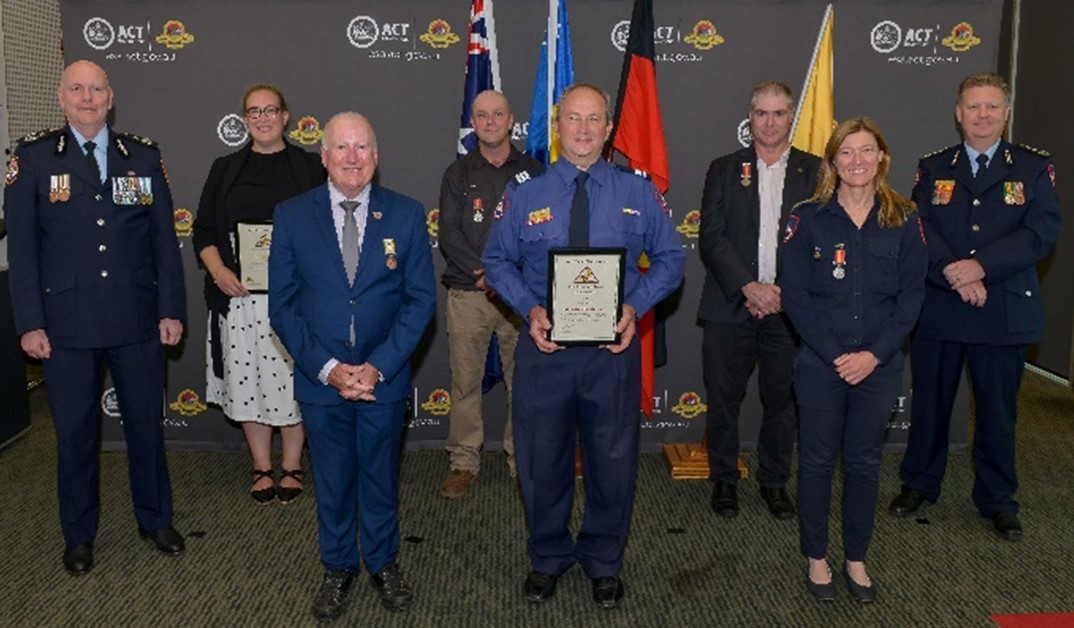 The Chief Officer awarded a certificate of Appreciation to Mr Robert Bibo for his commitment and dedication to the service in a short period of membership. The Chief Officer’s Commendation for Diligent Service was awarded to Ms Ruth Foxwell, Mr Stephen Horsburgh, Ms Rebekah Milne, Ms Chantelle Watson and Ms Shelly Walsh for their ongoing dedication and commitment to their Unit and the Service. The Chief Officer’s Commendation for Meritorious Service was awarded to Mrs Frances Bruce, Mr Gye Draney, Mr Richard Maddever, Mr Gabriel Nelson and Mr Ty Walker in recognition for their outstanding actions in relation to service duties, leadership, and exemplary performance during COVID-19 support tasks.

The Chief Officer’s Unit Commendation for Meritorious Service was awarded to the Pialligo SES Unit for their ongoing dedication and support during the 2019-20 bushfire season, and throughout the ACT COVID-19 response.

Mr Torben Smith, was awarded the Youth Achievement Award for his consistent diligence and commitment to the ACTSES, including the delivery of youth engagement programs, operational support, and community engagement activities.

Ms Madelene Gardener was awarded the Tony Graham Leadership and Values Award for her commitment and dedication to the betterment of the Belconnen SES Unit. Madelene was recognised for her tireless efforts to lead the largest Volunteer Unit in the ACTSES.

Mr Susith Adikari, an Intensive Care Paramedic with ACTAS was awarded the 2020 Rotary ACT Emergency Service Officer of the Year in a Paid capacity for his dedicated 13 years to ACTAS. Throughout this time, he has supported both domestic and internal causes, most notably the British Columbia bushfires in 2017 and the Canberra bushfires in 2020.

Mr Ian Morey, a volunteer firefighter with the Rivers RFS Brigade was awarded the 2020 Rotary ACT Emergency Service Officer of the year in a volunteer capacity for his dedication over 20 years with the ACTRFS. Ian played a vital role in containment of the 2020 Canberra bushfires as a brigade’s equipment officer. 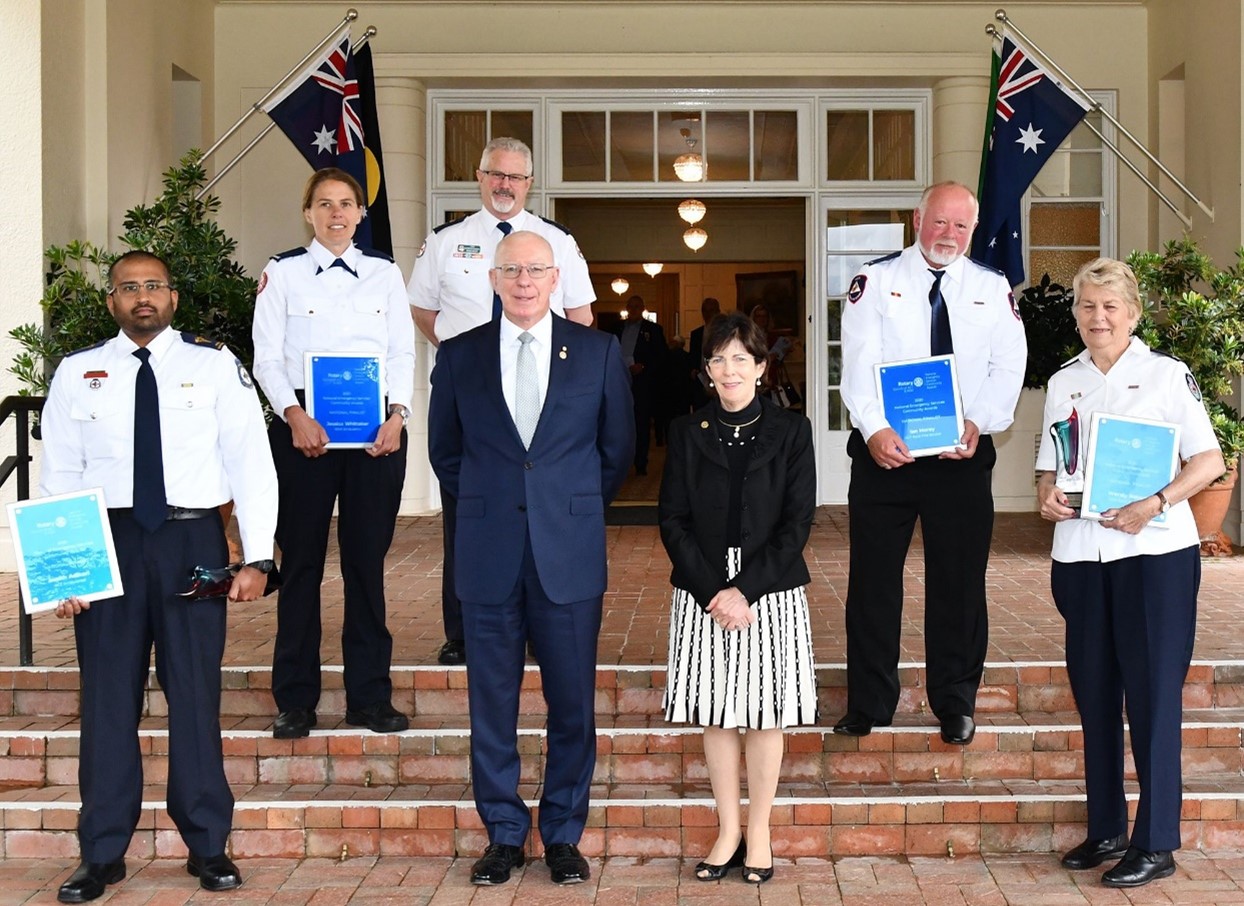 At a virtual ceremony held on Tuesday 08 September 2020, The ACT Emergency Services Agency (ACTSES and ACTRFS) was recognised with the Volunteer Team of the Year Award in the Volunteering ACT 2020 Award Ceremony. The award recognised the volunteers from across the agency who had gone beyond their normal duties and spent a significant amount of time away from their families, ensuring the safety and wellbeing of our community during the unrelenting year with fires, storms, and COVID-19.